After discovering the bodies in the container at the end of the last episode Saga and Martin have to face the reality that there are more people involved in the eco terrorism. As always the script threads the subplots expertly through each episode. I especially liked the way that we see the balance of the relationship between Jens and Martin changing subtly as Martin gains the upper hand over his son’s killer. And by having shown us the frailty of Martin and his vulnerability in the opening episodes it makes us all the more able to empathize with him.
And the developing drama of the lives of Caroline and Bodil are obviously leading us somewhere. I am resisting the temptation to read the reviews of the final episodes to see exactly how things pan out. Bodil gives Caroline the name of gigolo but although she arranges to see him she gets cold feet. But her husband suspects and the gigolo is lured to a meeting with Caroline but is assaulted by an unidentified assailant. But he’s texted Bodil beforehand so we know that she’s aware of the rendezvous. 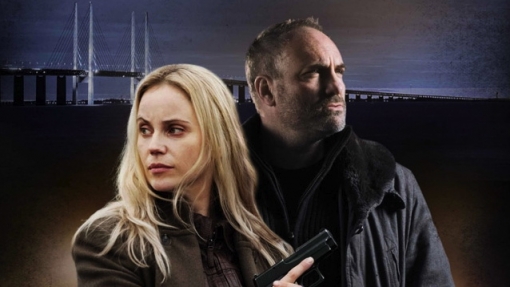 There was an irritating continuity blip when they announced the identity of a body from a plate in his leg without seemingly having  a post mortem. But we’ve come to accept the occasional slip and it does nothing to impair the entertainment.
The threat to Laura and the death of her lover form poison as she sat on a pin hidden in Laura’s bed while she was visiting her in hospital suggest that there are powerful forces at work and that we haven’t as yet seen the real motives behind the murders.
The ongoing relationships are of course what makes this compulsive viewing. The way that Saga pitches her head when she fails to comprehend why a colleague should question her. Rasmus has a great line when he announces to her that ‘something is wrong with you.’ Rasmus we know is unreliable and in the meantime Martin has to fend off the unwelcome attention of Pernille. All sobering stuff when they don’t seem anywhere nearer the killers and when in the final scene Saga is captured and taken hostage.