Rugby is the national sport of Wales and at the moment the nations of Wales, Scotland, Ireland, France, Italy and England are playing for the six nations trophy. It one of the greatest sporting spectacles in the world of rugby football. 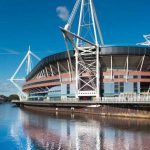 Here in Wales we are passionate about rugby believing that our team is capable of winning every time they take to the field. We take defeat badly.

I was in Cardiff at the beginning of February for the game between Wales and Scotland  at the Prinipality stadium– luckily we won. Each side plays every other country each season and the venue for the game alternates each year between the home grounds of each country. This year Wales are playing Scotland, Italy and France at home. The other games were we play Ireland and England are away.

Rugby started when schoolboys at Rugby School in England picked up the ball when playing football. The game developed from there and today it has a fanatical following in most of Wales although most of the support is found in South Wales. There are four professional regional sides all based in in South Wales . I’ve added a link to one of those clubs – the Scarlet’s that are based in Llanelli. SCARLETS CLUB LINK

Here in North Wales we do have a site called our RGC based in Colwyn Bay and they are very successful in the level down from the main regional sides.

The rules are quite complicated compared to football/soccer. There are set pieces were the game stops and play revolves around the players winning the ball either in what is called a scrum or a lineout. I’ve added a link to the Wikipedia page for Rugby union which gives you an idea of the background to the sport.

The governing body of the sport in Wales is called the Welsh Rugby union and if you click on this link give you a little bit of background to the sport itself in our country – http://www.wru.co.uk/ 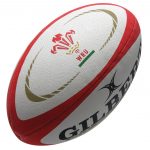 Rugby in the United States

The main competition for all countries playing rugby is the World Cup which was held in England last time and won by New Zealand who are the best team in the world. [The New Zealand team known as the All Blacks are famous for performing a free game ritual in front of their opposition called the haka. It is an ancient Maori war dance that is supposed to intimidate the opposition team and inspire the All Blacks to victory ] 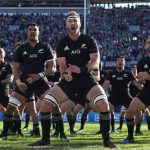 In 2019 the World Cup is being played in Japan who caused a major upset in the last World Cup by beating South Africa one of the great teams.
I was lucky enough to get a ticket for one of the quarter final games of the last World Cup which was played in Cardiff. I was expecting to see France but they didn’t do as well as expected and Argentina played Ireland. It was a fantastic game with the Pumas crushing Ireland in the first twenty minutes. My bank accounts didn’t stretch to being able to afford a ticket for the final in Twickenham London as £1000 each!