I was an avid viewer of the first series of The Bridge. As I mentioned in my blog about the first programme in the Hinterland series shown on BBC Wales at the beginning of the year – https://www.stephenpuleston.co.uk/blog/hinterland-review-of-first-in-series-january-6th/ we are becoming more accustomed to subtitles in the UK and hopefully the success of The Bridge and the other Nordic Noir programmes shown on the BBC will create a welcome and appreciative audience for Hinterland. 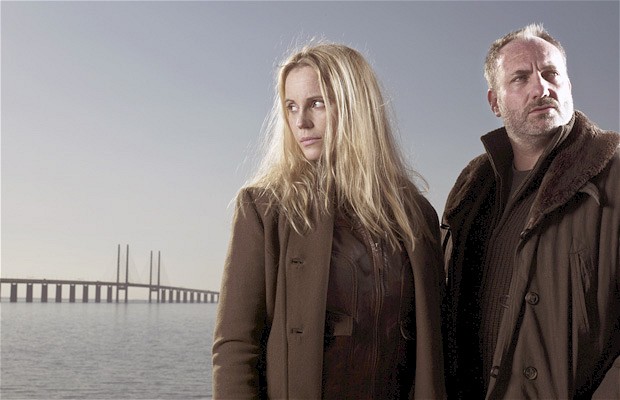 The first in the latest series of The Bridge reunites Saga and Martin and introduces the viewer to the final traumatic scene of the fist series. Saga is the quintessentially flawed detective with the symptoms of Asperger’s syndrome and Martin is undergoing therapy after the family tragedy of the first series. The relationship between both detective is both sensitive and tense. Martin is clearly coming to terms with the loss of his son and is haunted by the killer and Saga finds empathizing difficult. The scene where they are driving over the bridge to Sweden and the memories torture Martin and he sobs is made all the more real by Saga being unable to comprehend why he is crying and turning on the radio to drown out his tears. Kim Bodnia who plays Marti is particularly powerful in this scene as he is throughout in the portrayal of a man facing the challenges of mental illness. It is the sort of issue that I wanted Inspector Drake to be facing in my novel Brass in Pocket and in the second novel Worse than Dead he has to face the challenge of counseling.
The first episode build up the tension with carefully plotted scene laying the basis for all the characters that play a part in the drama. Looking forward to episode two already.