The Bridge continues to be compulsive viewing with every episode talking us deeper into the minds of the police officers and also into the activities of the eco terrorists. The videos that are posted on the web are a neat way of communicating a message to a mass audience. I would have liked to have seen more of the inevitable reaction from the press and politicians to this. Perhaps the absence of this is intended to focus our attention on the personalities involved. But I think even a brief scene where pressure is applied by superiors for a result would have helped build the tension.

I find the scenario of a policeman having therapy/counselling to be a every modern one that adds credibility and depth to the plot – i’ve covered this in my review of the Sopranos http://goo.gl/WUScKN. 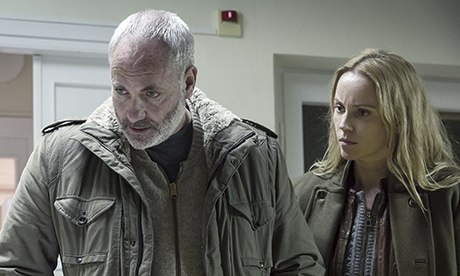 And of course for those of you reading Worse than Dead or about to there are counselling scenes included. And the behaviour and problems of Saga are treated as normal and acceptable somehow. ‘Saga doesn’t do irony,’ Martin tells Rasmus. It does make you wonder how exactly she can cope.

The final scene of episode 2 has the petrol tanker driving off into the night which is the scene that opens the third episode. And of course an explosion follows. But dogged police work turns up the identity of the eco terrorist but it’s only episode 3 so there must be something else going on. And why are we getting scenes of a woman executive with her sex-mad sister and boring husband. No doubt all will be revealed and in the meantime it keeps me hooked.