After the Fire
After the Fire is the final novel from the Swedish novelist Henning Mankell. He is most famous for the Wallander series of crime novels. Those detective novels garnered him an international reputation as one of the leading crime writers of his generation. This novel is not part of that series and is a stand-alone novel published after his death.
The Wallander novels always had an engaging charm. Kurt Wallander was rounded and compelling although of course flawed as every good detective must be. All the novels had a compelling sense of place that reflected Henning Mankell’s interest in the importance of civic society and how he reminisced about the deterioration in Swedish values.

After the Fire shares this element of melancholia. The main character Fredrik Welin is a retired doctor in his 70s who lives on his own on an island in Stockholm archipelago. The property has a long history as it was owned by his grandparents and a lot of the narrative is taken up with reminiscing about his childhood and his parents. Welin is an isolated and lonely figure, resentful of the world and of his own perceived failings. He has a daughter that he only discovered when she had reached adulthood and there is a continuing thread of loss throughout the book. 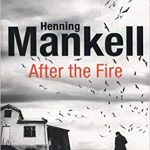 Welin’s story is told against the background of a fire that destroys his home. He is initially a suspect which he finds astonishing. A local journalist, a woman half his age takes an interest, and he believes that she has an interest in him. It is the illusions of an old man hoping that a younger woman will take an interest in him that make Welin clichéd but also vulnerable at the same time.

The developing relationship that he has with his daughter throughout the period covered by the narrative provides the only beacon of hope for a positive future plagued as it is by the uncertainties of whether the insurance company will fund the rebuilding of the property. Welin travels to Paris where his daughter lives and meets her new partner, initially finding it difficult to understand what his daughter finds attractive about the man.

Other properties are set on fire and some of the adjacent islands that leads to a conclusion that an arsonist is at work. At least it makes Welin certain that the insurance company will meet his claim.
The culprit is eventually identified – I don’t want to spoil the enjoyment of reading the novel by disclosing the name but there is a slight element, as in some other Henning Mankell’s novels that we don’t learn about the motive, the why? Mankell’s writing transcends the simple day-to-day police procedural challenging us to think more deeply or profoundly about what it is to be human, how we perceive and value our past and what we look forward to in the future. I suppose more than anything it is that which makes Mankell a great novelist.

Click on one of these links to grab you copy of the book.