The first series was of course the British version based on the novel by Michael Dobbs featuring Francis Urquhart as the ambitious and Machiavellian chief whip in the House of Commons, London. It was an engrossing and utterly addictive series made all the more viewable by Francis Urquhart breaking the ‘fourth wall’ and talking to the audience directly. I recently watched the entirety of the 13 episodes of the American House of Cards featuring Kevin Spacey. It was utterly unmissable and the script is so polished it shines. I was one of the patient fans waiting for the second series to be released. 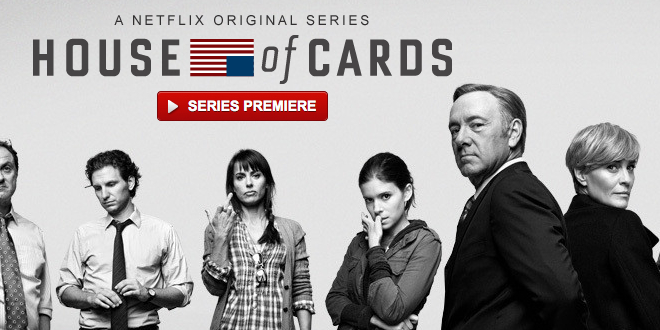 So far I have watched episodes one through four. France’s Underwood played by Kevin Spacey is now the vice president. His place as the majority Whip has been taken by Jacqueline Sharp a Congresswoman favoured by Underwood. In the background are the journalists working away into his background, especially Lucas Goodwin an editor on the Washington Herald whose girlfriend Zoe Barnes(who was embroiled in an affair with Underwood in the first series) has been pushed under an underground train. Goodwin is desperate to try and establish evidence against Underwood and contacts criminal underworld in an attempt to hack his phone. It appears that his attempts have not gone unnoticed.

Meanwhile because of a possible contamination scare in the White House a planned interview with Vice President and Mrs Underwood as to be rescheduled with Mrs Underwood alone. During the interview Mrs Underwood discloses that she was raped by a senior military official when they were both students. This scene is one of the most dramatic and commanding pieces of drama but I have seen for some time. It transforms Mrs Underwood from a scheming Shakespearian character into a woman of sensitivity and vulnerability.

I doubt that we will see anything as powerful in the rest of the series. And of course Kevin Spacey finishes the scene returning to the house having seen his wife’s interview on television with the look of exhilaration that only power can give. This is high-quality drama with a script that has been honed and polished. It is so good that I want to watch each episode over a second time.