This is the 12 part series based in Brussels featuring Paul Gerardi as the maverick policeman caught in complex web of intrigue involving members of a super influential secret society called salamander. The plot begins with a break in at private bank where the contents of sixty-six safety deposit boxes belonging to members of salamander are stolen. Their influence seems to reach into the highest levels of Belgian society. The direction follows the Nordic Noir style of washed out lighting and the careful measured development plot which is compelling.

Our hero is hurled into the depths of Belgian society where powerful people want to protect their vested interests. Despite offers to switch his allegiance and orders to become involved with a female witness Gerardi maintains his integrity. He isn’t an all action hero any means but the careful plot and measured tone ensures that we believe him to be a hero worth our sympathy. 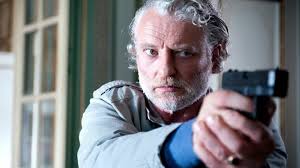 The scale of the conspiracy is perhaps a little far-fetched. After all there would been just the same impact had that been thirty-three boxes. However, the series weaves very effectively the moral strength of Gerardi against the corrupt secret society and political compromises and imperatives. Filip Peeters who plays Geradi never manages to equal Kenneth Branagh as Wallander nor the down-at-heel Kin Bodnia as Martin Rohde in the bridge.

However it is compelling crime drama and certainly worth watching on a Saturday night.