Summer solstice from the top of Snowdon

In 2015 I walked to the top do Snowdon with my son Rhys to experience the sun rising on the morning of the 21st June – the summer solstice. Unfortunately, by the time we got to the summit it was cold, wet, and thoroughly miserable. There were many people already at the top and some had been camping overnight near that cafe. But it was cloudy and dark and although we waited for the sun to break through we gave up and descended.

We didn’t venture last year for various reason but this year we decided to get to wax our boots, dust off our walking clothes and venture once again up the highest mountain in England and Wales.
I had woken early on the morning of the 20th hoping that I could then sleep for a few hours before leaving the house a little after midnight. I slept fitfully for a couple of hours and I hoped I wouldn’t be too tired when I reached the summit.

As we neared the car park in Llanberis a little after one in the morning, we passed a crowd of fifteen or so with walking poles and headtorches ready for the ascent. Once we’d parked and organised our kit we set off for the Llanberis path. It is the most frequently used path and probably the safest to use in the middle of the night. But it does involve a steep walk for the first twenty minutes or so and the initial section is on tarmac roads.

A left turn takes the path onto the gravelled slab-faced footpath to the top of Snowdon. It was at this stage that I stooped to take off my fleece leaving me with a single thin outer layer. It was a warm and humid evening and I began to regret my rucksack full of layers and a jacket. We walked steadily up to the half way cafe – closed,of course – where we met the group we had seen earlier stopping for a drink and something to eat.

A little way after the halfway house is Allt Moses [Moses’ Hill in English] which is a steep drag but once you reach the top it levels out to pass underneath a small bridge where the Snowdon mountain railway passes over the footpath. It was about half way up Allt Moses when I turned to look at Rhys. The light from my head torch caught the perspiration on his face and his sodden hair clinging to his head. I said something like ‘do I look like you?’ and the light from his torch played over my head. Apparently I looked equally damp and dishevelled.
By the time we reached the top of Allt Moses we caught up with more walkers all resting before the final push for the summit. Checking our watches reassured us we were making good time so we sat and rested for fifteen minutes looking down at the road from Llanberis and the lights of early morning drivers. 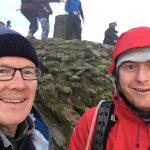 Knowing that once we were clear of the shelter provided by the railway embankment I found a fleece from bag and we set off. It should have been an hour or so to the summit but we made good time and found ourselves on the short flat section where the Miners and Pyg track meet the Llanberis path where we stopped. I cast a glimpse over Crib Goch and spotted to figures on the skyline. They were either very confident or suicidal to be waking the Crib Coch in the middle of the night. It is one of the more treacherous paths to the summit.

By the time we reached the summit we had plenty of time to spare. Finding a place to sit was difficult. We did not make a detailed count but there must have been upwards of a hundred people waiting for sunrise. Rhys and I dragged on various layers and sat looking eastwards. We demolished our sandwiches, drank water and waited.

Luckily we weren’t disappointed although there was a lot of fog that swirled around. We waited until a about 5.15am [sunrise was 4.57] and we rewarded with some glorious images of the sun rising and illuminating the mountains around us. Dozens of smart phones were pointed at the sun.

Walking down is hard – perhaps harder than the ascent as the pounding of the slabs and rocks on the path hammer the knees. I was glad to be back in Llanberis a little before 8 am and even more pleased to be sitting in Pete’s Eats where I drank a glass of orange juice in one hit. A bacon sandwich fared no better.

Walking Snowdon is something everyone should do but you can do it in daylight [the half way cafe is open in the summer too]. It is a wonderful experience. I’ve added some photographs and a video her too.