It can be disadvantageous to read a book out of sequence in a crime series. Other reviewers of Indridason’s work have suggested that the absence of Erlendur in this novel is a let down. Having not read and therefore been familiar with his other novels I read Outrage without knowing this character.  All the family tension revolved around Elinborg and her children but oddly never with her husband who as a result becomes two dimensional. 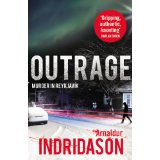 As someone familiar with the procedures in a police station and the pressures that ordinary people can feel when questioned by the police the scenarios described in the book were very authentic.

It is a classic detective novel in that the reader is kept guessing who the culprit was until near the end. The motive was clearly mapped out and the ground work for the back-story of the victim plainly established. It moved at a reasonable pace with the character of Elinborg developing effectively and we did get a sense of the challenges facing her as a detective in Iceland. I found the sense of place rather muted as I was expecting rather more descriptive depth. At times there was rather too much exposition but perhaps the dynamic of the narrative is lost in translation.  There was a power to the narrative that gave the book a disturbing feel that echoes the claustrophobic nature of Icelandic society.